The annual Hood To Coast Relay has run every year since 1982. The race started as an inauspicious event for a group of dedicated runners to stretch their legs and expand on the everyday running experience. Bob Foote, the race founder, had run track with the famous Men of Oregon at the University of Oregon. Marathons had lost their appeal, and to keep himself interested in the sport he loved, he decided to organize an unheard of adventure, running from Timberline Lodge on Mount Hood to the Oregon Coast.

The idea was that 12 people would divide themselves into two groups of six, run three legs each and cover the nearly 200 mile distance from the mountain to the ocean. Running all through the night, it was an adventure for hard-core runners and sleep was secondary to striving for their fastest time.

In 1982 only 8 teams ran, but within a decade, the race had grown to the point where they had to cap the number of teams at 1000. The route shifted to avoid heavily trafficked highways as they needed to find convenient stopping points for the thousands of vans that now made their way through the Oregon countryside.

More importantly, the race had become an adventure not only for serious athletes, but amateur runners and thrill seekers. Team names began to describe not only the origins of the team, but the attitude they would carry with them on the course. Today, teams decorate their vans and take on a race persona, lending a carnival atmosphere to the nearly 200 miles of the race.

The race has become a worldwide phenomenon among runners. Teams travel from all 50 states to join the fun, and well over 50 countries send representatives. World class athletes like Mary Decker Slaney and Alberto Salazar have run the race. As Bart Yasso of Runner's World describes it, "Hood To Coast is a must-do in a runner's life". But it's not about the competition, it's about the people.

It's an indescribable feeling, becoming part of a community that forms like a flash flood for the two days of the race. With the love and support that the runners show not only for their own team but for the other runners on the road, the individual truly becomes part of a whole. 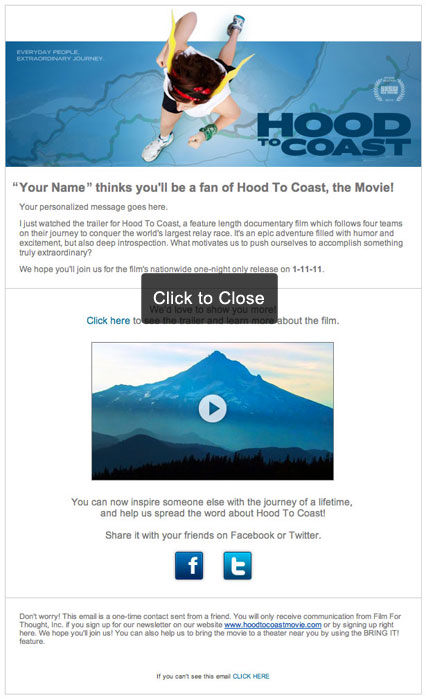